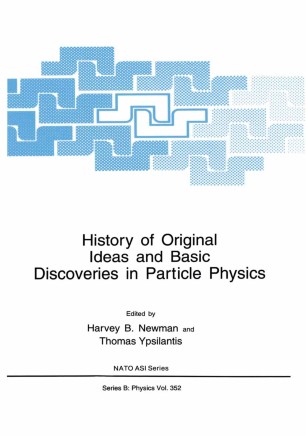 History of Original Ideas and Basic Discoveries in Particle Physics

The International Conference on the History of Original Ideas and Basic Discoveries, held at the "Ettore Majorana" Centre for Scientific Culture in Erice, Sicily, July 27-August 4, 1994, brought together sixty of the leading scientists including many Nobel Laureates in high energy physics, principal contributors in other fields of physics such as high Tc superconductivity, particle accelerators and detector instrumentation, and thirty-six talented younger physicists selected from candidates throughout the world. The scientific program, including 49 lectures and a discussion session on the "Status and Future Directions in High Energy Physics" was inspired by the conference theme: The key experimental discoveries and theoretical breakthroughs of the last 50 years, in particle physics and related fields, have led us to a powerful description of matter in terms of three quark and three lepton families and four fundamental interactions. The most recent generation of experiments at e+e- and proton-proton colliders, and corresponding advances in theoretical calculations, have given us remarkably precise determinations of the basic parameters of the electroweak and strong interactions. These developments, while showing the striking internal consistency of the Standard Model, have also sharpened our view of the many unanswered questions which remain for the next generation: the origin and pattern of particle masses and families, the unification of the interactions including gravity, and the relation between the laws of physics and the initial conditions of the universe.