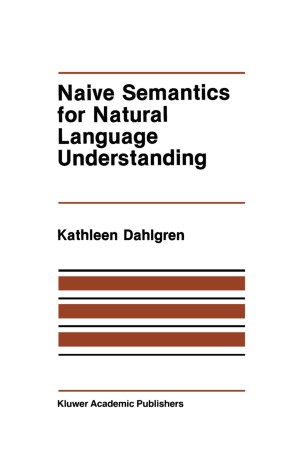 Part of the The Kluwer International Series in Engineering and Computer Science book series (SECS, volume 58)

This book introduces a theory, Naive Semantics (NS), a theory of the knowledge underlying natural language understanding. The basic assumption of NS is that knowing what a word means is not very different from knowing anything else, so that there is no difference in form of cognitive representation between lexical semantics and ency­ clopedic knowledge. NS represents word meanings as commonsense knowledge, and builds no special representation language (other than elements of first-order logic). The idea of teaching computers common­ sense knowledge originated with McCarthy and Hayes (1969), and has been extended by a number of researchers (Hobbs and Moore, 1985, Lenat et aI, 1986). Commonsense knowledge is a set of naive beliefs, at times vague and inaccurate, about the way the world is structured. Traditionally, word meanings have been viewed as criterial, as giving truth conditions for membership in the classes words name. The theory of NS, in identifying word meanings with commonsense knowledge, sees word meanings as typical descriptions of classes of objects, rather than as criterial descriptions. Therefore, reasoning with NS represen­ tations is probabilistic rather than monotonic. This book is divided into two parts. Part I elaborates the theory of Naive Semantics. Chapter 1 illustrates and justifies the theory. Chapter 2 details the representation of nouns in the theory, and Chapter 4 the verbs, originally published as "Commonsense Reasoning with Verbs" (McDowell and Dahlgren, 1987). Chapter 3 describes kind types, which are naive constraints on noun representations.