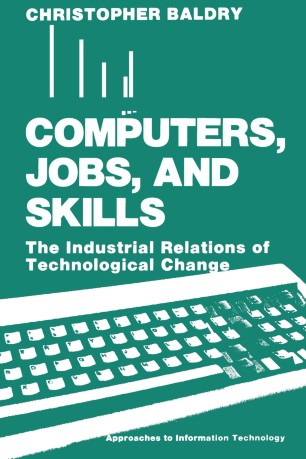 The Industrial Relations of Technological Change

"Faith. Hope. and Charity and the greatest of these is Charity. " "Hardware. Software. and Lil'ell'are and the greatest of these is . . . " As information technology ceased to be the prerogative of computer scientists and electronics engineers, those of us from other disciplines had to contend with the jargon which was already in vogue. We learned to live with "hardware" and "software. " We were less enthusiastic about "Iiveware. " Polite and some impolite questioning revealed that "Iiveware" was a euphemism for "people. " We were not amused. As one spirited participant observed, "I refused to go home and tell my children that Almighty God had made liveware in His own image and likeness. " People are too important to be known as anything but people. Moreover, it is the importance of people that is the dominating and recurring theme of this book by Christopher Baldry. He deals with virtually every aspect of the problems concerning men and women and their recourse to the equipment. This could well become the definitive work in the field. In addition to the details of health hazards, industrial relations, new technology agreements and the like, Dr. Baldry grapples with two great underpinning issues.