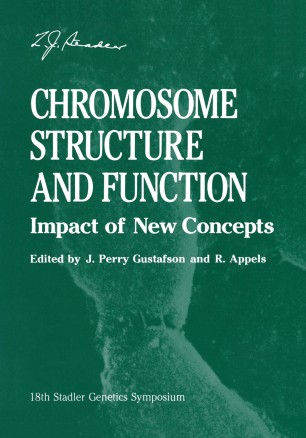 A Historical Perspective on the Study of Chromosome Structure and Function R. Appels Division of Plant Industry CSIRO P.O. Box 1600 A.C.T. AUSTRALIA "Modern physical science gives us no model to explain the re­ duplication of the gene-string in each cell generation, or to ex­ plain the production of effective quantities of specific enzymes or other agents by specific genes. The precise pairing and inter­ change of segments by homologous gene-strings at meiosis also suggest novel physical properties of this form of matter". Stadler (1954) The very strong influence of reductionism in the history of understanding chromosome structure and function is evident in the above quotation from Stadler's 1954 paper, "The gene". Earlyob­ servations on the constancy of the cytological appearance of chromo­ somes and their regular behaviour in cell division led to specula­ tion on their biological importance. As genetics became more refined in the early decades of the 20th century the genes-on-a­ string model of chromosomes developed and greater emphasis was placed on the further dissection of these structures. As a result, in the 1980's the reductionist approach is reaching a crest as extensive regions of the genetic material are being sequenced.