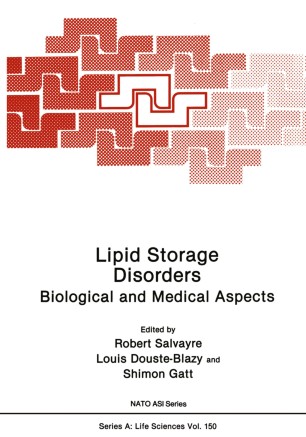 This book presents the proceedings of the meeting on "Lipid Storage Disorders" which took place in Toulouse, France, in September 14-18, 1987 and which was set up as a joint NATO Advanced Research Workshop and INSERM International Symposium. The meeting probably was the first truly international symposium devoted entirely to basic as well as applied aspects of lipid metabolism as related to the lipid storage disorders. Participants came from Europe, USA, Israel and Japan, and presented data on research in molecular biology and genetics, enzymology, cell biology as well as medical and epidemiological aspects of normal and pathological lipid metabolism. In the latter case, special attention was directed to the lysosomal B-glucosidase in relation to Gaucher disease and to sphin­ gomyelinase in relation to Niemann-Pick disease, and "two round" table discussions were devoted to the two respective items. But research on many other lipidoses was presented, as lectures or posters and avidly discussed. Other topics presented in special sessions were drug induced lipidoses and peroxisomal disorders. The meeting ended with a session devoted to medical aspects of disorders of lipid metabolism. The symposium which included about 50 lectures and close to 70 posters had an intense scientific character superimposed on a most pleasant and collegial atmosphere. Ample time was provided to personal discussions ; lodging of the participants in the students' residence located near the meeting place, permitted further contacts between them.