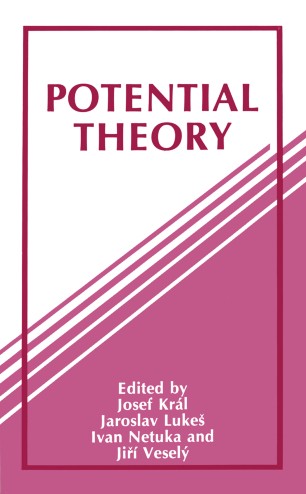 Within the tradition of meetings devoted to potential theory, a conference on potential theory took place in Prague on 19-24, July 1987. The Conference was organized by the Faculty of Mathematics and Physics, Charles University, with the collaboration of the Institute of Mathematics, Czechoslovak Academy of Sciences, the Department of Mathematics, Czech University of Technology, the Union of Czechoslovak Mathematicians and Physicists, the Czechoslovak Scientific and Technical Society, and supported by IMU. During the Conference, 69 scientific communications from different branches of potential theory were presented; the majority of them are in­ cluded in the present volume. (Papers based on survey lectures delivered at the Conference, its program as well as a collection of problems from potential theory will appear in a special volume of the Lecture Notes Series published by Springer-Verlag). Topics of these communications truly reflect the vast scope of contemporary potential theory. Some contributions deal with applications in physics and engineering, other concern potential­ theoretic aspects of function theory and complex analysis. Numerous papers are devoted to the theory of partial differential equations. Included are also many articles on axiomatic and abstract potential theory with its relations to probability theory. The present volume may thus be of intrest to mathematicians speciali­ zing in the above-mentioned fields and also to everybody interested in the present state of potential theory as a whole.