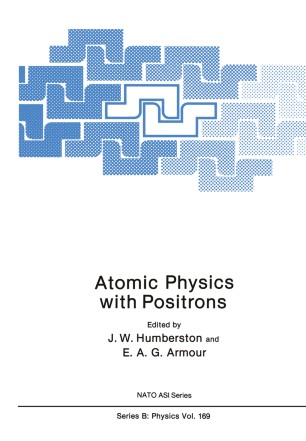 The NATO Advanced Research Workshop on Atomic Physics with Positrons, which was held at University College London during 15-18 July 1987, was the fourth meeting in a series devoted to the general theme of positron colli­ sions in gases. Previous meetings have been held at York University, Toronto (1981); Royal Holloway College, Egham (1983) and Wayne State Uni­ versity, Detroit (1985). Recent very significant improvements in positron beam currents, due to the development of more efficient moderators and the use of more intense positron sources, are making possible an increasingly sophisticated range of experiments in atomic collision physics. Whereas a few years ago only total scattering cross sections could be determined, measurements can now be made of various partial and differential cross sections. Intense positron beams are also being used to produce positronium beams and already, as reported here, preliminary investigations have been made of collisions of positronium with several target systems. These experimental developments have stimulated, and been stimulated by, steady, if somewhat less spectacu1ar,progress in associated theoretical studies. Both aspects of the field are well represented in these Proceed­ ings.