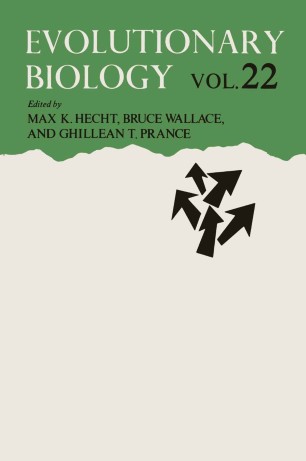 Evolutionary Biology, of which this is the twenty-second volume, continues to offer its readers a wide range of original articles, reviews, and commentaries on evolution, in the broadest sense of that term. The topics of the reviews range from anthropology, molecular evolution, and paleobiology to principles of systematics. In recent volumes, a broad spectrum of articles have appeared on such subjects as asymmetric sexual isolation, biochemical systematics in plants, species selection, DNA hybridization and phylogenetics, modes of evolution in Pleistocene rodents, and development and evolution of the vertebrate limb. We have also attempted to provide a forum for con­ flicting ideas. Articles such as these, often too long for standard journals, are the material for Evolutionary Biology. The editors continue to solicit manuscripts on an international scale in an effort to see that everyone ofthe many facets of biological evolution is covered. Manuscripts should be sent to anyone of the following: Max K. Hecht, Department of Biology, Queens College of the City University of New York, Flushing, New York 11367; Bruce Wallace, Department of Biology, Virginia Polytechnic Institute and State University, Blacks­ burg, Virginia 24061; GhilleanT. Prance, New York Botanical Garden, Bronx, New York 10458. The Editors vii Contents 1. Phylogeny of Early Vertebrate Skeletal Induction and Ossification Patterns ....................................... 1 John G. Maisey Introduction: The Fossil Record.. .. .. ...... .. .. .. .. .. .. .. .. .. .. .. .. 1 ..