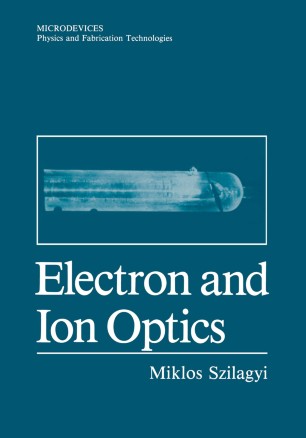 The field of electron and ion optics is based on the analogy between geometrical light optics and the motion of charged particles in electromagnetic fields. The spectacular development of the electron microscope clearly shows the possibilities of image formation by charged particles of wavelength much shorter than that of visible light. As new applications such as particle accelerators, cathode ray tubes, mass and energy spectrometers, microwave tubes, scanning-type analytical instruments, heavy beam technologies, etc. emerged, the scope of particle beam optics has been exten­ ded to the formation of fine probes. The goal is to concentrate as many particles as possible in as small a volume as possible. Fabrication of microcircuits is a good example of the growing importance of this field. The current trend is towards increased circuit complexity and pattern density. Because of the diffraction limitation of processes using optical photons and the technological difficulties connected with x-ray processes, charged particle beams are becoming popular. With them it is possible to write directly on a wafer under computer control, without using a mask. Focused ion beams offer especially great possibilities in the submicron region. Therefore, electron and ion beam technologies will most probably playa very important role in the next twenty years or so.