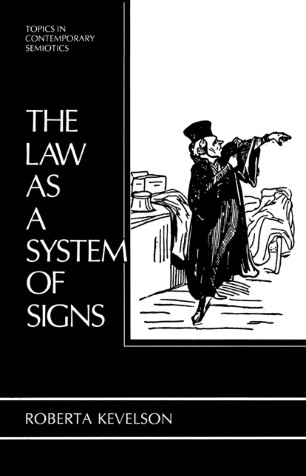 The Law as a System of Signs

Part of the Topics in Contemporary Semiotics book series (TICSE)

Even if Peirce were well understood and there existed· general agreement among Peirce scholars on what he meant by his semiotics, or philosophy of signs, the undertaking of this book-wliich intends to establish a theoretical foundation for a new approach to understanding the interrelations of law, economics, and politics against referent systems of value-would be a risky venture. But since such general agreement on Peirce's work is lacking, one's sense of adventure in ideas requires further qualification. Indeed, the proverbial nerve for failure must in any case be attendant. If one succeeds, one has introduced for further inquiry the strong possibility that should our social systems of law, economics, and politics---our means of interpersonal transaction as a whole-be understood against the theoretical back­ ground of a dynamic, "motion-picture" universe that is continually becoming, that is infinitely developing and changing in response to genuinely novel elements that emerge as existents, then the basic concepts of rights, resources, and reality take on new dimensions of meaning in correspondence with n-dimensional, infinite value judgments or truth-like beliefs which one holds. If such a view, as Peirce maintained, were possible and tenable not only for philosophy but as the basis for action and interaction in the world of human experience and practical affairs, one would readily say that risk taking is a small price for the realization of such possibility.