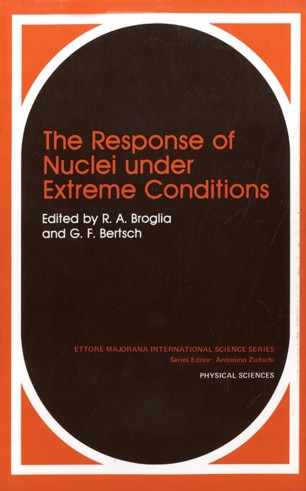 The Response of Nuclei under Extreme Conditions

In recent years, a new field of nuclear research has been opened through the possibility of studying nuclei wi\h very large values of angular momentum, temperature, pressure and number of particles. This development has been closely associated with heavy ion reactions, since collisions between two heavy nuclei are especially effective in producing metastable compound systems with large angular momentum, and in transferring energy which is distributed over the whole nuclear volume. Under the strain of temperature and of the Coriolis and centrifugal forces, the nucleus displays structural changes which can be interpreted in terms of pairing and shape phase transit­ ions. This was the subject of the lectures of J. D. Garrett, P. J. Twin and S. Levit. While the rotational motion is, at zero temperature un­ damped, the width of giant resonances indicate that the nucleus only oscillates through few periods before the motion is damp­ ed by particle decay, and through coupling to the compound nucleus. Temperature and angular momentum influence in an im­ portant way the properties of both giant resonances and rotatio­ nal motion. These subjects were developed by K. Snover, and by P. F. Bortignon and R. A. Broglia, as well as by A. Bracco, A. Dellafiore and F. Matera.