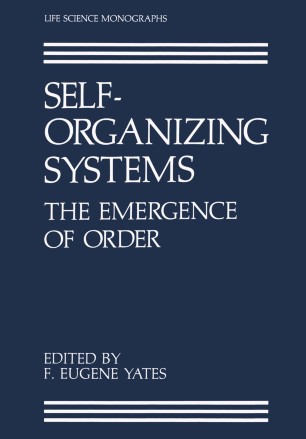 The Emergence of Order

Technological systems become organized by commands from outside, as when human intentions lead to the building of structures or machines. But many nat­ ural systems become structured by their own internal processes: these are the self­ organizing systems, and the emergence of order within them is a complex phe­ nomenon that intrigues scientists from all disciplines. Unfortunately, complexity is ill-defined. Global explanatory constructs, such as cybernetics or general sys­ tems theory, which were intended to cope with complexity, produced instead a grandiosity that has now, mercifully, run its course and died. Most of us have become wary of proposals for an "integrated, systems approach" to complex matters; yet we must come to grips with complexity some­ how. Now is a good time to reexamine complex systems to determine whether or not various scientific specialties can discover common principles or properties in them. If they do, then a fresh, multidisciplinary attack on the difficulties would be a valid scientific task. Believing that complexity is a proper scientific issue, and that self-organizing systems are the foremost example, R. Tomovic, Z. Damjanovic, and I arranged a conference (August 26-September 1, 1979) in Dubrovnik, Yugoslavia, to address self-organizing systems. We invited 30 participants from seven countries. Included were biologists, geologists, physicists, chemists, mathematicians, bio­ physicists, and control engineers. Participants were asked not to bring manu­ scripts, but, rather, to present positions on an assigned topic. Any writing would be done after the conference, when the writers could benefit from their experi­ ences there.