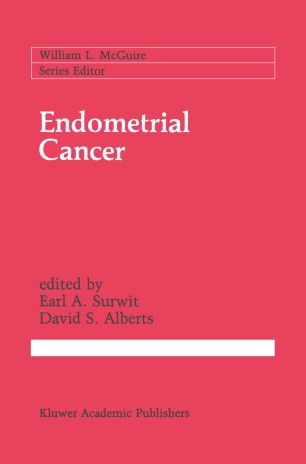 The incidence of endometrial cancer rose sharply in the United States in the early 1970s, paralleling changes in the use of postmenopausal estrogens by American women. A sizeable body of evidence supports the role of both excessive endogenous estrogen and exogenous estrogen in the etiology of endometrial cancer. There is growing evidence that inadequate progesterone has the opposite effect, in that progesterone supplementation of postmeno­ pausal estrogen therapy reduces the incidence of endometrial cancer. Despite this new awareness of the hormonal role that is played in carcino­ ma of the endometrium, the disease still plagues the oncologist. The general approach to carcinoma of the endometrium in the United States is that of primary surgical staging. This provides the maximum amount of information to best plan postoperative radiation therapy and/or chemotherapy for these patients. In general, patients who are considered candidates for surgical staging are those with advanced disease or high-risk stage I endometrial carcinoma. High-risk endometrial carcinoma is defined as those patients with moderately differentiated lesions with deep myometrial invasion, poor­ ly differentiated carcinoma of the endometrium, and the high-risk histolo­ gies such as papillary carcinoma and clear-cell carcinomas. The surgical staging has extended in most institutions to patients with occult stage II carcinoma of the endometrium, i. e.