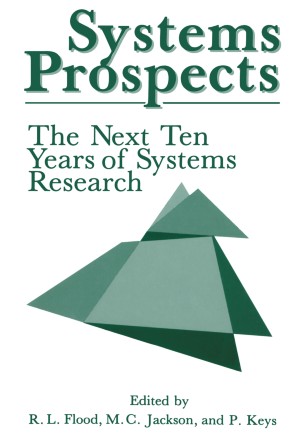 The Next Ten Years of Systems Research

Systems Prospects is a record of the papers presented at the first con­ ference organised by the United Kingdom Systems Society (UKSS), held at Thwaite Hall, Hull University (UK), on the dates 12th-15th July, 1988. The UKSS originally came together in 1978 as the Barford Group (the first meetings were held in the town of Barford), comprising academics from the four institutions that incorporated departments which primarily were con­ cerned with developing the theory and practice of so-called systems scienc- namely Aston University, City University, Lancaster University and the Open University. The meetings of the Barford Group were deemed to be successful, so much so that a decision was made to widen its horizons to incorporate more generally those of the United Kingdom systems community (a diffuse number of academics and practitioners) - hence the title UKSS. The society, ten years later, is extant and has achieved new levels of success in the last few years in terms of rising membership and international reputation. The membership is now drawn from a wide variety of academic and commercial and industrial organisations, and from most reaches of the nation. There is also an international contingent in the membership. It is right that there should be such diversity since the UKSS is founded on the notion of equality (of creed, sex, race, class and so on ••• ). This community is "glued" together by the Society's own publication, Systemist, as well as through workshops and now this conference.