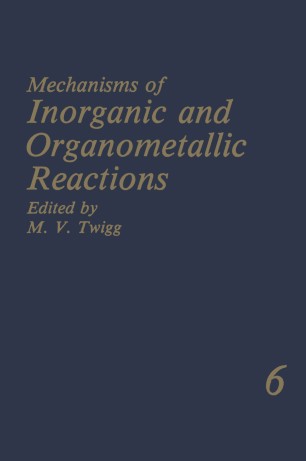 Mechanisms of Inorganic and Organometallic Reactions

This series, Mechanisms of Inorganic and Organometallic Reactions, provides an ongoing critical review of the published literature concerned with the mechanisms of reactions of inorganic and organometallic compounds. Emphasis is on reactions in solution, although solid state and gas phase studies are included where they provide mechanistic insight. The sixth volume deals with papers published during the period January 1987 through June 1988 inclusive, together with some earlier work where it is appropriate to make comparisons. Coverage spans the whole area as comprehensively as practically possible, and the cited references are chosen for their relevance to the elucidation of reaction mechanisms. The now familiar format of earlier volumes has been maintained to facilitate tracing progress in a particular topic over several volumes, but some small changes have been made. Reflecting the a'mount of mechanistic work associated with ligand reactivity, and the growing importance of this area, Chapter 12 has been renamed and enlarged to bring together informa­ tion on both coordination and organometallic systems involving ligand reactions. Numerical data are usually reported in the units used by the original authors, except when making comparisons and conversion to common units is necessary.