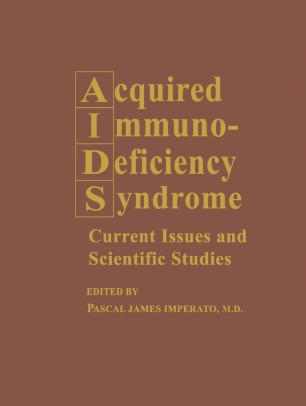 When Pascal James Imperato, MD, assumed the edi­ • Exclusion by the New York State Departm~nt of Health of qualified laboratories from HIV testmg torship of the New York State Journal of Medicine in 198~, the acquired immunodeficiency syndro. me (AIDS) epI­ • Protection of health care workers • Responsibilities of physicians and other health care demic in the United States was already SIX years old. Dur­ ing the time of his editorship, two thematic issues of the workers Journal have been devoted to AIDS. In addition, a large • Public education number of original communications have been regularly • AIDS confidentiality published on the subje~t. This volume ?rings together The Symposium on AIDS in Washington, DC, had important articles published on AIDS m the Journal been so successful that the MSSNY, under the auspices of during 1987 and 1988. . . the task force and the Division of Governmental Affairs, In the early years of the epidemic the Medical Society of held two informational symposia for state senators and the State of New York (MSSNY) was aware that it had a assemblymen and their staffs in Albany, New York. Thes. e responsibility to both the professi?~ an~ the public to add were presented in February 1988 and. March. 1989. ,!,hIS its efforts to those already mobIlized m the attempt to effort has convinced the MSSNY that It has given legisla­ understand and control this tragic disease. Early on, the tors a better understanding of the overall AIDS problem.