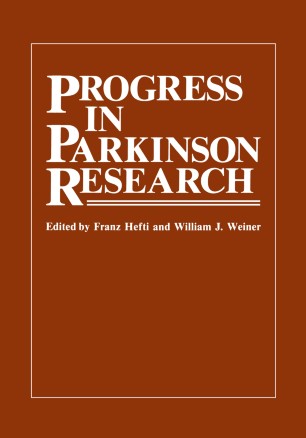 In the past five years significant progress has been made in our basic and clinical under­ standing of Parkinson's disease. The discovery that MPTP, a relatively simple molecule, is able to induce parkinsonism in otherwise healthy adult humans, and the recent interest in the possibility of "transplantation" procedures as a therapeutic modality in the treatment of Parkin­ son's disease have generated enormous interest in research related to Parkinson's disease. In this setting, the National Parkinson Foundation decided to organize a research meeting to bring together scientists actively engaged in research relevant to the study of Parkinson's disease, to accelerate its progress and to promote an exchange of ideas. This meeting took place in Janu­ ary 1988 at Key Biscayne, Florida. It was decided to publish the proceedings ofthis meeting to allow rapid documentation of the participants current findings and views regarding this rapidly of this volume follows the organization of the meeting and begins evolving field. The structure with a clinical and neuropathological review of current knowledge regarding Parkinson's dis­ ease. Since dopaminergic neurons playa major role in the pathophysiology of the disease, many of the contributions relate to some aspects of dopaminergic function including localiza­ tion, regulation, and pharmacology of dopamine receptors. A special effort has been made to provide a summary of the present knowledge of the cellular biology of the dopaminergic neurons.