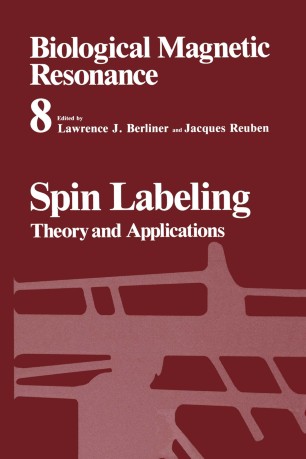 We present this special topics volume on an area which has not received thorough coverage for over 12 years. Spin Labeling: Theory and Applications represents a complete update on new theoretical aspects and applications of the spin-label method. In the "line-shape theory" sections, we are especially pleased to include an IBM-compatible diskette supplied by David Schneider and Jack Freed which contains fast, accurate, ready-to-use software for slow-motion simulations. Barney Bales discusses inhomogeneous broadening phenomena in detail. Several developments in techniques and interpretation in saturation transfer spectroscopy have appeared since the publica­ tion of Spin Labeling II: Theory and Applications (L. J. Berliner, ed., Academic Press, 1979). We have included an up-to-date chapter on spin-label applications by M. A. Hemminga and P. A. de Jager. By incorporating 15N and deuterium into nitroxide spin labels, several unique advantages are derived in line-shape analysis. Albert Beth and Bruce Robinson have contributed a detailed chapter on the analysis of these labels in the slow-motion regime while Jane Park and Wolfgang Trommer present the advantages for specific biochemical examples in our "applications" section. Derek Marsh's contri­ bution on spin-label spectral analysis may be regarded as a summary chapter which touches on several of the detailed spectral analysis methods described in the earlier chapters.

Dr. Lawrence J. Berliner is currently Professor and Chair of the Department of Chemistry and Biochemistry at the University of Denver after retiring from Ohio State University, where he spent a 32-year career in the area of biological magnetic resonance (EPR and NMR). He is the Series Editor for Biological Magnetic Resonance, which he launched in 1979.