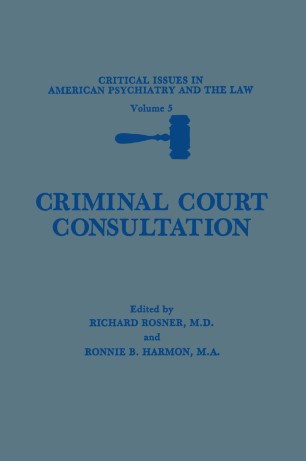 Part of the Critical Issues in American Psychiatry and the Law book series (CIAP, volume 5)

During the 1980s, those of us who were involved in forensic psychiatry have seen an increase in the interest in our subspecialty. This increased interest has been from psychiatrists, lawyers, judges, and correctional officials as well. As a part of this demand for our services, there has also been an increase in the demand for detailed quality in our reports and testimony. Whether this is the result of the educational efforts of the American Academy of Psychiatry and the Law, the establishment of the American Board of Forensic Psychiatry, the stimulation of thought by the publication of this series, Critical Issues in American Psychiatry and the Law, or Supreme Court decisions such as Ake v Oklahoma is anybody's guess. My experience as an observer of the development of the patient's rights movement was that there was a coalescence of numerous forces, such as the new human rights movement, the active mental health bar, and the development of neuroleptics. I therefore suspect that there are a multitude of factors contributing to the new interest in forensic psychia­ try and the elevation of the standards of forensic experts. Regardless of the causes, those who are practicing forensic psychiatry today are ex­ pected to conduct more thorough evaluations and to report findings more completely. No longer will simple conclusory statements be accept­ able. The forensic psychiatrist is expected to present data in a clear, understandable, detailed, reliable, and competent fashion whether testi­ fying or in a report.