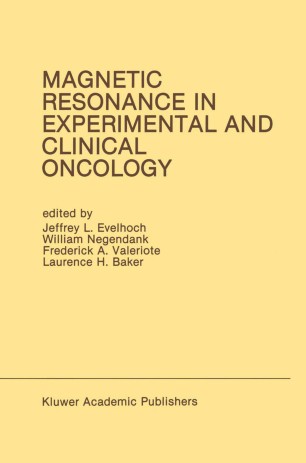 Part of the Developments in Oncology book series (DION, volume 61)

Over the past decade, techniques have been developed and implemented to observe metabolism noninvasively in localized regions of intact, living experimental animals and humans through the use of magnetic resonance spectroscopy (MRS). At the same time, magnetic resonance imaging (MRI) techniques developed in the 1970s and refined in this decade have been increasingly applied as a powerful clinical tool to probe human anatomy. Because of the unusual metabolic and physiologic characteristics of malignant tissues, oncology has been one of the primary focuses of the application of both MRS and MRI. Although considerable progress has been made in oncologic applications of magnetic resonance (MR), further research is needed to realize the full potential of MR in this area. Consequently, the 21st Annual Detroit Cancer Symposium entitled "Magnetic Resonance in Experimental and Clin­ ical Oncology" was organized to provide a forum for researchers in the field to report the state of the art of MRS and MRI in oncol­ ogy, to discuss future goals for MRS and MRI in oncology, and to define the research needed to meet those goals. The major emphasis of the symposium was on MRS due to both the recent widespread availability of clinical MRS instrumentation and the extensive amount of animal MRS research performed over the past half decade.