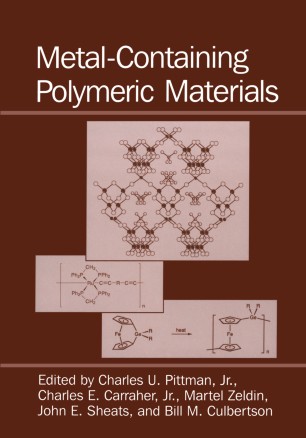 Research on metal-containing polymers began in the early 1960's when several workers found that vinyl ferrocene and other vinylic transition metal TI -complexes would undergo polymerization under the same conditions as conventional organic monomers to form high polymers which incorporated a potentially reactive metal as an integral part of the polymer structures. Some of these materials could act as semi­ conductors and possessed one or two dimensional conductivity. Thus applications in electronics could be visualized immediately. Other workers found that reactions used to make simple metal chelates could be used to prepare polymers if the ligands were designed properly. As interest in homogeneous catalysts developed in the late 60's and early 70's, several investigators began binding homogeneous catalysts onto polymers, where the advantage of homogeneous catalysis - known reaction mechanisms and the advantage of heterogeneous catalysis - simplicity and ease of recovery of catalysts could both be obtained. Indeed the polymer matrix itself often enhanced the selectivity of the catalyst. The first symposium on Organometallic Polymers, held at the National Meeting of the American Chemical Society in September 1977, attracted a large number of scientists interested in this field, both established investigators and newcomers. Subsequent symposia in 1977, 1979, 1983, and 1987 have seen the field mature. Hundreds of papers and patents have been published.