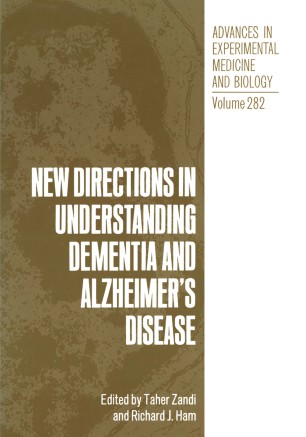 Part of the Advances in Experimental Medicine and Biology book series (AEMB, volume 282)

The management of Alzheimer's Disease and the related dementias is one of the major challenges to health care professionals and American society-at-large for the coming decade and the coming millennium. The rapid growth of the over-eighty-five population, the group which, as recent studies have confirmed and as many of us clinicians have long suspected, has an even higher prevalence than previously quoted of dementing disorders, is the major cause of this. We are thus challenged by, as Bernard Issacs used to call it, "the survival of the unfittest," as well as the oPtimistic approach of "bringing life to years," as John F. Kennedy said. The fact is that we, as a society, tend to confuse "treatment" and "cure" (and "prevention"). As the proceedings of the conference which this book represents emphasize, there is considerable work going on about the potential prevention of, or at least the reduction of, symptomatology in these illnesses by interventions genetically, chemIcally, and so forth. However, the more we find out, the more complicated it becomes, and the more heterogeneous Alzheimer's and the related disorders appear to be, not only in their manifestations (as clinicians have long recognized) but also in the individual initiating and underlying processes. For these reasons, absolute preventive techniques or the likelihood of an intervention which will reverse the process in a high proportion of patients, do not appear to be just around the corner.