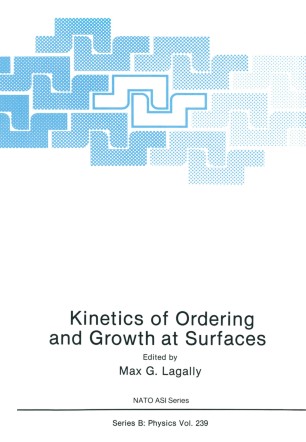 Kinetics of Ordering and Growth at Surfaces

This volume contains the papers presented at the NATO Advanced Research Workshop on "Kinetics of Ordering and Growth at Surfaces", held in Acquafredda di Maratea, Italy, September 18-22, 1989. The workshop's goal was to bring together theorists and experimentalists from two related fields, surface science and thin-film growth, to highlight their common interests and overcome a lack of communication between these two communities. Typically surface scientists are only concerned with the microscopic (atomic) description of solids within one monolayer of the surface. Thin-film growers are usually considered more empirical in their approach, concerned primarily with the "quality of their product", and have not necessarily found it useful to incorporate surface science understanding into their art. This workshop aimed to counter at least in some measure these stereotypes. Its focus was on generating dialogue on the fundamental structural and kinetic processes that lead to the initial stages of film growth, from both the surface science and crystal growth perspectives. To achieve this, alternate days emphasized the view of surface science and thin-film growth, with considerable time for discussion, a format that appeared to succeed well. The success of the workshop is in large measure due to the efforts of the organizing committee, L. C. Feldman, P. K. Larsen, J. A. Venables, and J. Villain, whose advice on the constitution of the program was invaluable.