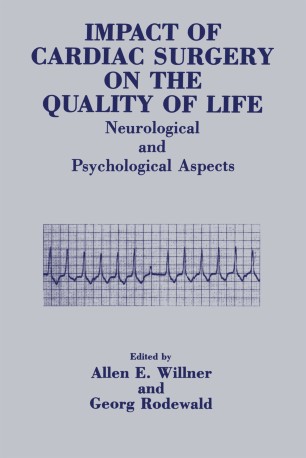 Impact of Cardiac Surgery on the Quality of Life

Georg Rodewald University of Hamburg Hamburg, Federal Republic of Germany Allen E. Willner Hillside Hospital Glen Oaks, NY In contrast to the initial years of cardiac surgery (37 years ago), there is now increasing interest in cerebral protection. Rodewald [1] in 1978 was among the first to point out the surgeon's concern with "psychopathological problems" and Taylor [2] in 1989 stressed that" ••• the awareness of the cerebral consequences of open heart surgery has risen considerably in recent years • • • " This book reviews the evidence for neurological, psychological, and neuropsycho­ logical reactions to cardiac surgery. In previous studies one problem is that small samples of patients were studied with different measuring instruments so that it was difficult to ma~e sense of inconsistent findings. Considerable controversy resulted with little ability to sort out discrepant findings. It appeared that a large multi­ center study using uniform measures might help clarify the picture.