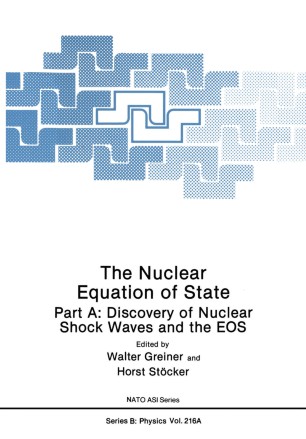 The Nuclear Equation of State

Part A: Discovery of Nuclear Shock Waves and the EOS

The NATO Advanced Study Institute on The Nuclear Equatioo of State was held at Peiiiscola Spain from May 22- June 3, 1989. The school was devoted to the advances, theoretical and experimental, made during the past fifteen years in the physics of nuclear matter under extreme conditions, such as high compression and high temperature. Moie than 300 people had applied for participatio- this demonstrates the tremendous interest in the various subjects presented at the school. Indeed, the topic of this school, namely the Nuclear Equatioo of State, • plays the central role in high energy heavy ion collisions; • contains the intriguing possibilities of various phase transitions (gas - vapor, meson condensation, quark - gluon plasma); • plays an important role in the static and dynamical behavior of stars, especially in supernova explosions and in neutron star stability. The investigation on the nuclear equation of state can only be accomplished in the laboratory by compressing and heating up nuclear matter and the only mechanism known to date to achieve this goal is through shock compression and -heating in violent high energy heavy ion collisions. This key mechanism has been proposed and highly disputed in of high energy heavy ion physics, the early 70's. It plays a central role in the whole field and particularly in our discussions during the two weeks at Peiiiscola.