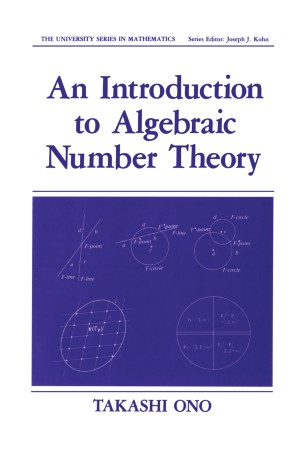 An Introduction to Algebraic Number Theory

Part of the University Series in Mathematics book series (USMA)

This book is a translation of my book Suron Josetsu (An Introduction to Number Theory), Second Edition, published by Shokabo, Tokyo, in 1988. The translation is faithful to the original globally but, taking advantage of my being the translator of my own book, I felt completely free to reform or deform the original locally everywhere. When I sent T. Tamagawa a copy of the First Edition of the original work two years ago, he immediately pointed out that I had skipped the discussion of the class numbers of real quadratic fields in terms of continued fractions and (in a letter dated 2/15/87) sketched his idea of treating continued fractions without writing explicitly continued fractions, an approach he had first presented in his number theory lectures at Yale some years ago. Although I did not follow his approach exactly, I added to this translation a section (Section 4. 9), which nevertheless fills the gap pointed out by Tamagawa. With this addition, the present book covers at least T. Takagi's Shoto Seisuron Kogi (Lectures on Elementary Number Theory), First Edition (Kyoritsu, 1931), which, in turn, covered at least Dirichlet's Vorlesungen. It is customary to assume basic concepts of algebra (up to, say, Galois theory) in writing a textbook of algebraic number theory. But I feel a little strange if I assume Galois theory and prove Gauss quadratic reciprocity.