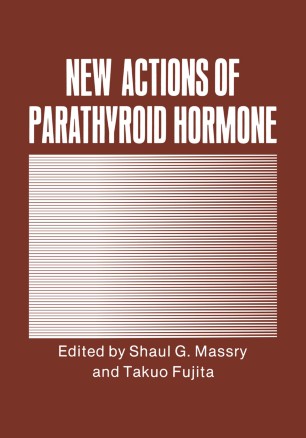 Shaul G. Massry Division of Nephrology, The University of Southern California, School of Medicine Los Angeles, California In the last two decades evidence has accumulated indicating that parathyroid hormone may exert a multitude of effects on many cells and a variety of organs beyond its classical targets: the kidney and the bone. These efforts have been spearheaded by nephrologists. The interest of this group of clinicians-scientists stems from the fact that patients with renal failure have secondary hyperparathyroidism and markedly elevated blood levels of PTH (1,2). If this hormone does act on various organs, it becomes plausible that excess blood levels of PTH may be harmful in these patients. Indeed, in an Editorial published in 1977, Massry suggested that the elevated blood levels of PTH in patients with renal failure may exert deleterious effects on many systems and as such may participate in the genesis of many of the manifestations of the uremic syndrome (3). Thus, the essence of the Massry hypothesis is the notion that PTH may act as a major uremic toxin. The search for uremic toxins did not yield successful results. In the last three decades many compounds have been implicated as uremic toxins. However, a cause and effect relationship between these compounds and the manifestations of the uremic syndrome has not been established in most cases.