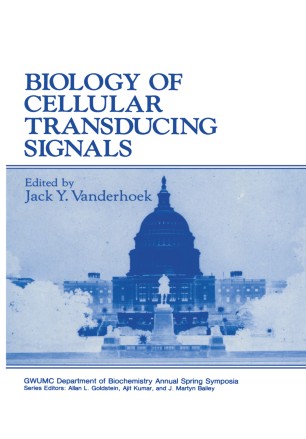 Intercellular communication in multicellular organisms enables cells to respond to environmental changes. Intercellular signal transduction transmitters include hormones, peptide growth factors, neurotransmitters as well as some lipid-soluble mediators. Once signalling molecules are bound to their cell surface receptors, one or more intracellular signals are generated which alter the Qehavior of the target cell. The IXth International Washington Spring Symposium at the George Washington University in Washington, D.C. was organized to assess the current status of the field of signal transduction processes and regulatory mechanisms. The symposium was held on May 8-'.2, 1989 and was attended by more than 1000 scientists from 30 countries. Most of the papers presented at the plenary sessions have been collected in this volume. The first section of this book details the action and regulation of receptors such as ,B-pdr.'nergic receptors and receptors for EGF, insulin, leukotrienes, phosphoinositides and prostaglandins. Section two focuses on the family of guanine nucleotide regulatory proteins (G proteins). These G proteins are known to mediate the coupling of receptor-mediated signals to several intracellular effector systems. Papers are presented describing the intracellular localization of G proteins, the utilization of G protein antibodies, the interaction of G proteins with tubulin and the involvement of G proteins in the regulation of ion channels, adenylate cy~lase and in the activation of neutrophils and T cells. In the third section, several papers describe the second messenger role of phosphoinositides as well as the regulation of phosphoinositide production.