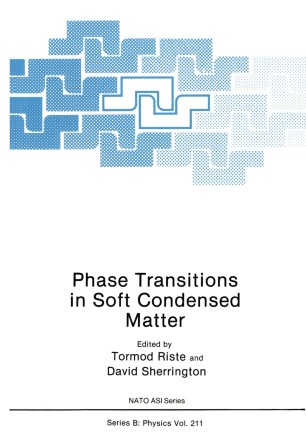 This volume comprises the proceedings of a NATO Advanced Study Institute held in Geilo, Norway, between 4 - 14 April 1989. This Institute was the tenth in a series held at Geilo on the subject of phase transitions. It was the first to be concerned with the growing area of soft condensed matter, which is neither ordinary solids nor ordinary liquids, but somewhere in between. The Institute brought together many lecturers, students and active researchers in the field from a wide range of NATO and some non-NATO countries, with financial support principally from the NATO Scientific Affairs Division but also from Institutt for energiteknikk, the Nor­ wegian Research Council for Science and the Humanities (NAVF), The Nordic Institute for Theoretical Atomic Physics (NORDITA), the Norwegian Physical Society and VISTA, a reserach cooperation between the Norwegian Academy of Science and Letters and Den norske stats oljeselskap a.s (STATOIL). The organizing committee would like to thank all these contributors for their help in promoting an exciting and rewarding meeting, and in doing so are confident that they echo the appreciation also of all the participants. 50ft condensed matter is characterized by weak interactions between polyatomic constituents, by important·thermal fluctuations effects, by mechanical softness and by a rich range of behaviours. The main emphasis at this Institute was on the fundamental collective physics, but prepar­ ation techniques and industrial applications were also considered.