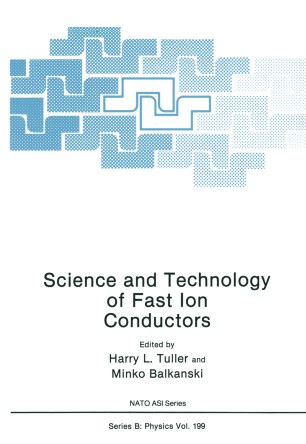 The rediscovery of fast ion conduction in solids in the 1960's stimulated interest both in the scientific community in which the fundamentals of diffusion, order-disorder phenomena and crystal structure evaluation required re-examination, and in the technical community in which novel approaches to energy conversion and chemical sensing became possible with the introduction of the new field of "Solid State Ionics. " Because of both the novelty and the vitality of this field, it has grown rapidly in many directions. This growth has included the discovery of many new crystalline fast ion conductors, and the extension to the fields of organic and amorphous compounds. The growth has involved the extension of classical diffusion theory in an attempt to account for carrier interactions and the development of sophisticated computer models. Diffraction techniques have been refined to detect carrier distributions and anharmonic vibrations. Similar advances in the application of other techniques such as NMR, Raman, IR, and Impedance Spectroscopies to this field have also occurred. The applications of fast ion conducting solid electrolytes have also developed in many directions. High energy density Na/S batteries are now reaching the last stages of development, Li batteries are being implanted in humans for heart pacemakers, and solid state fuel cells are again being considered for future power plants. The proliferation of inexpensive microcomputers has stimulated the need for improved chemical sensors--a major application now being the zirconia auto exhaust sensor being sold by the millions each year.