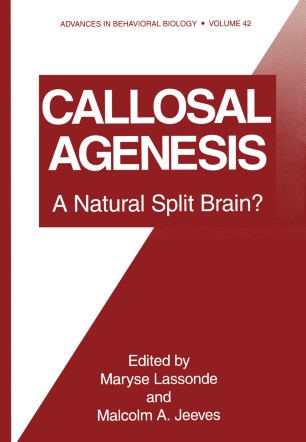 This book is devoted to the description of agenesis of the corpus callosum, a congenital malformation of midline structures in the brain that may be regarded as a natural model of the "split-brain. " First reported by Rei! in 1812, this anomaly has since been described by several investigators. Interest in this malformation was revived in the 1970s by studies of interhemispheric transfer in Bogen and Vogel's commissurotomized patients and the subsequent findings by Sperry that acallosal patients were devoid of the typical disconnection deficits found in patients with surgical transection of the corpus callosum. Since this seminal work, the bulk of neuropsychological research on callosal agenesis has focused on the particulars of interhemispheric transfer and integration. An ever-growing literature has emerged on the subject, attempting to specify the extent and limits of neural plasticity in a nervous system that has evolved in the absence of the most important interhemispheric pathway. Whilst callosal agenesis proves to be an excellent model of cerebral plasticity, it has to be pointed out that this anomaly is often associated with other malformations and neurological diseases that may result in different degrees of mental retardation or other cognitive and sensorimotor deficits. In this context, neurological research on callosal agenesis has concentrated on the description of various syndromes associated with this pathology as well as on the attempt to specify its neurobehavioral manifestations.