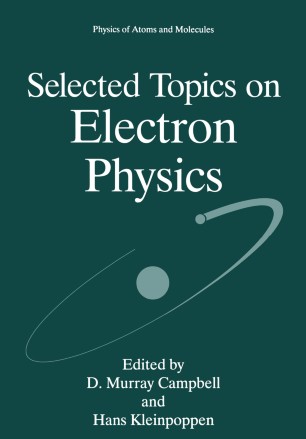 In the spring of 1970 Peter Farago organised a three-day conference on Polarised Electron Beams at Carberry Tower, near Edinburgh. Although the development of the gallium arsenide source, which was to revolutionise the world of experimental polarised electron physics, was still some years in the future, the meeting provided an important forum for the exchange of ideas among theoreticians and experimentalists engaged in both high and low energy electron collision studies. As soon as the decision had been taken to hold the 5th European Conference on Atomic and Molecular Physics in Edinburgh in 1995, it occurred to the editors of the present volume that it would be highly appropriate to mark the twenty-fifth anniversary of the Carberry Tower Conference by organising an ECAMP satellite meeting in honour of Peter Farago. The opportunity to pay tribute to Peter's many important contributions in the broad field of electron physics attracted colleagues from allover the world to the symposium, which was held in the rooms of the Royal Society of Edinburgh on 31st March and 1st April 1995. Peter himself, now Professor Emeritus at the University of Edinburgh, was present throughout the meeting. We were particularly happy to welcome back to Edinburgh many participants in the original Carberry Tower conference; these included Professor P. G. Burke, Professor J. Kessler, Professor E. Reichert and Professor H. C. Siegmann, whose review papers had been highlights of the 1970 meeting.