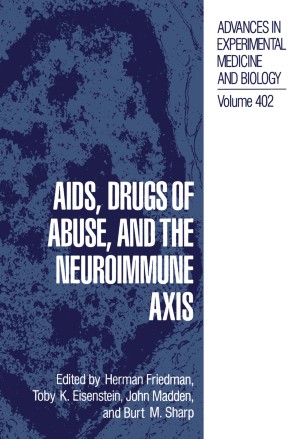 AIDS, Drugs of Abuse, and the Neuroimmune Axis

Part of the Advances in Experimental Medicine and Biology book series (AEMB, volume 402)

This volume represents the Proceedings of the Symposium on AIDS, Drugs of Abuse and the Neuroimmune Axis. This meeting was held in San Diego, California, November 11-13, 1995. As in the previous symposia in this series, productive studies were reviewed concerning the relationship between the nervous and the immune systems in regards to the relationship between drugs of abuse and infections, especially infections by the immunode­ ficiency virus that causes AIDS. In recent years, various investigators have begun to describe the role of illicit drugs and their endogenous counterparts on the brain-immune axis. It is widely recognized that the neuroendocrine system is intimately involved in the effects and manifestations of the interactions of drugs of abuse and the immune system. The meeting on which the chapters in this book are based brought together many biological scientists from an array of various scientific disciplines whose work is focused on the effects of drugs of abuse on the neuroendocrine-immune axis and its relationships to immunodeficiency caused by the AIDS virus. As in the past, the symposium was unique in focusing on the . brain-immune axis from the viewpoint of drugs of abuse rather than from the viewpoint of immunity or the brain itself.