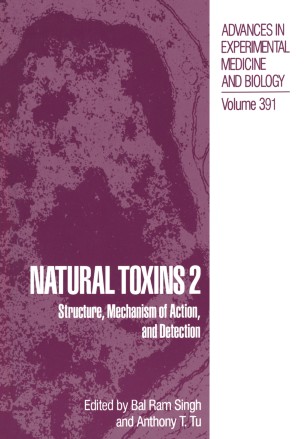 Structure, Mechanism of Action, and Detection

Part of the Advances in Experimental Medicine and Biology book series (AEMB, volume 391)

From beach encounters, aquaculture perils, and processed-food poisoning to snake bites and biological warfare, natural toxins seem never to be far from the public's sight. A better understanding of toxins in terms of their origin, structure, structure-function relation­ ships, mechanism of action, and detection and diagnosis is of utmost importance to human and animal food safety, nutrition, and health. In addition, it is now clear that many of the toxins can be used as scientific tools to explore the molecular mechanism of several biological processes, be it a mechanism involved in the function of membrane channels, exocytosis, or cytotoxicity. Several of the natural toxins have also been approved as therapeutic drugs, which has made them of interest to several pharmaceutical companies. For example, botulinum neurotoxins, which have been used in studies in the field of neurobiology, have also been used directly as therapeutic drugs against several neuromus­ cular diseases, such as strabismus and blepherospasm. Toxins in combination with modem biotechnological approaches are also being investigated for their potential use against certain deadly medical problems. For example, a combination of plant toxin ricin and antibodies is being developed for the treatment of tumors. The great potential of natural toxins has attracted scientists of varying backgrounds-pure chemists to cancer biologists-to the study of fundamental aspects of the actions of these toxins.