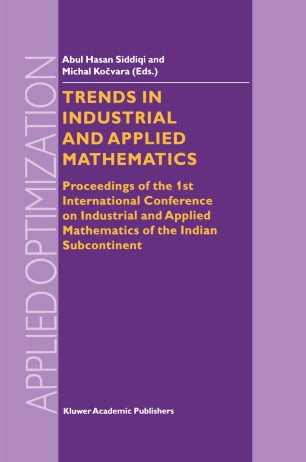 Trends in Industrial and Applied Mathematics

An important objective of the study of mathematics is to analyze and visualize phenomena of nature and real world problems for its proper understanding. Gradually, it is also becoming the language of modem financial instruments. To project some of these developments, the conference was planned under the joint auspices of the Indian Society of Industrial and Applied mathematics (ISlAM) and Guru Nanak Dev University (G. N. D. U. ), Amritsar, India. Dr. Pammy Manchanda, chairperson of Mathematics Department, G. N. D. U. , was appointed the organizing secretary and an organizing committee was constituted. The Conference was scheduled in World Mathematics Year 2000 but, due one reason or the other, it could be held during 22. -25. January 2001. How­ ever, keeping in view the suggestion of the International Mathematics union, we organized two symposia, Role of Mathematics in industrial development and vice-versa and How image of Mathematics can be improved in public. These two symposia aroused great interest among the participants and almost everyone participated in the deliberations. The discussion in these two themes could be summarized in the lengthy following lines: "Tradition of working in isolation is a barrier for interaction with the workers in the other fields of science and engineering, what to talk of non-academic areas, specially the private sector of finance and industry. Therefore, it is essential to build bridges within in­ stitutions and between institutions.