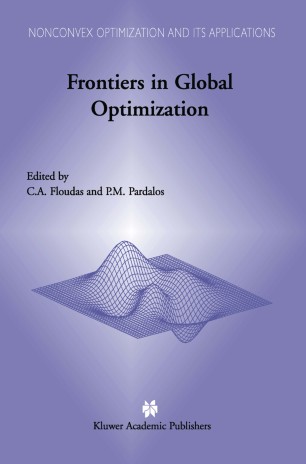 Part of the Nonconvex Optimization and Its Applications book series (NOIA, volume 74)

Global Optimization has emerged as one of the most exciting new areas of mathematical programming. Global optimization has received a wide attraction from many fields in the past few years, due to the success of new algorithms for addressing previously intractable problems from diverse areas such as computational chemistry and biology, biomedicine, structural optimization, computer sciences, operations research, economics, and engineering design and control. This book contains refereed invited papers submitted at the 4th international confer­ ence on Frontiers in Global Optimization held at Santorini, Greece during June 8-12, 2003. Santorini is one of the few sites of Greece, with wild beauty created by the explosion of a volcano which is in the middle of the gulf of the island. The mystic landscape with its numerous mult-extrema, was an inspiring location particularly for researchers working on global optimization. The three previous conferences on "Recent Advances in Global Opti­ mization", "State-of-the-Art in Global Optimization", and "Optimization in Computational Chemistry and Molecular Biology: Local and Global approaches" took place at Princeton University in 1991, 1995, and 1999, respectively. The papers in this volume focus on de­ terministic methods for global optimization, stochastic methods for global optimization, distributed computing methods in global optimization, and applications of global optimiza­ tion in several branches of applied science and engineering, computer science, computational chemistry, structural biology, and bio-informatics.