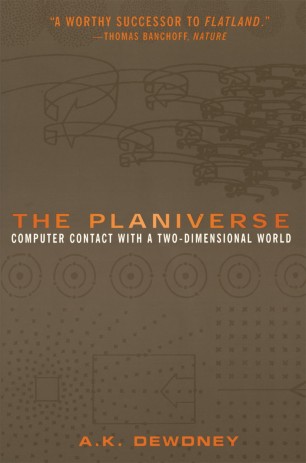 When The Planiverse ?rst appeared 16 years ago, it caught more than a few readers off guard. The line between willing suspension of dis- lief and innocent acceptance, if it exists at all, is a thin one. There were those who wanted to believe, despite the tongue-in-cheek subtext, that we had made contact with a two-dimensional world called Arde, a di- shaped planet embedded in the skin of a vast, balloon-shaped space called the planiverse. It is tempting to imagine that those who believed, as well as those who suspended disbelief, did so because of a persuasive consistency in the cosmology and physics of this in?nitesimally thin universe, and x preface to the millennium edition in its bizarre but oddly workable organisms. This was not just your r- of-the-mill universe fashioned out of the whole cloth of wish-driven imagination. The planiverse is a weirder place than that precisely - cause so much of it was “worked out” by a virtual team of scientists and technologists. Reality, even the pseudoreality of such a place, is - variably stranger than anything we merely dream up.