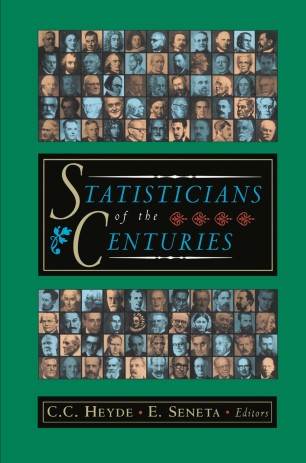 Statisticians of the Centuries

Statisticians of the Centuries aims to demonstrate the achievements of statistics to a broad audience, and to commemorate the work of celebrated statisticians. This is done through short biographies that put the statistical work in its historical and sociological context, emphasizing contributions to science and society in the broadest terms rather than narrow technical achievement. The discipline is treated from its earliest times and only individuals born prior to the 20th Century are included. The volume arose through the initiative of the International Statistical Institute (ISI), the principal representative association for international statistics (founded in 1885). Extensive consultations within the statistical community, and with prominent members of ISI in particular, led to the names of the 104 individuals who are included in the volume. The biographies were contributed by 73 authors from across the world.
The editors are the well-known statisticians Chris Heyde and Eugene Seneta. Chris Heyde is Professor of Statistics at both Columbia University in New York and the Australian National University in Canberra. He is also Director of the Center for Applied Probability at Columbia. He has twice served as Vice President of the ISI, and also as President of the ISI's Bernoulli Society. Eugene Seneta is Professor of Mathematical Statistics at the University of Sydney and a Member of the ISI. His historical writings focus on 19th Century France and the Russian Empire. He has taught courses on the history of probability-based statistics in U.S. universities. Both editors are Fellows of the Australian Academy of Science and have, at various times, been awarded the Pitman Medal of the Statistical Society of Australia for their distinguished research contributions.