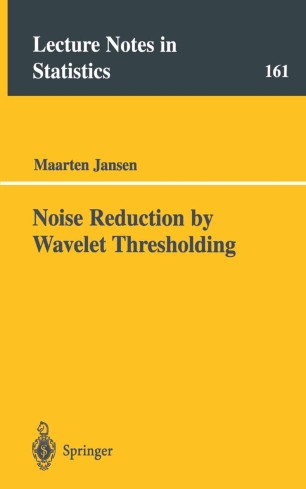 Wavelet methods have become a widely spread tool in signal and image process­ ing tasks. This book deals with statistical applications, especially wavelet based smoothing. The methods described in this text are examples of non-linear and non­ parametric curve fitting. The book aims to contribute to the field both among statis­ ticians and in the application oriented world (including but not limited to signals and images). Although it also contains extensive analyses of some existing methods, it has no intention whatsoever to be a complete overview of the field: the text would show too much bias towards my own algorithms. I rather present new material and own insights in the questions involved with wavelet based noise reduction. On the other hand, the presented material does cover a whole range of methodologies, and in that sense, the book may serve as an introduction into the domain of wavelet smoothing. Throughout the text, three main properties show up ever again: sparsity, locality and multiresolution. Nearly all wavelet based methods exploit at least one of these properties in some or the other way. These notes present research results of the Belgian Programme on Interuniver­ sity Poles of Attraction, initiated by the Belgian State, Prime Minister's Office for Science, Technology and Culture. The scientific responsibility rests with me. My research was financed by a grant (1995 - 1999) from the Flemish Institute for the Promotion of Scientific and Technological Research in the Industry (IWT).