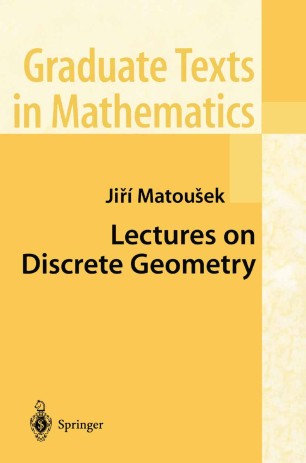 Discrete geometry investigates combinatorial properties of configurations of geometric objects. To a working mathematician or computer scientist, it offers sophisticated results and techniques of great diversity and it is a foundation for fields such as computational geometry or combinatorial optimization.

This book is primarily a textbook introduction to various areas of discrete geometry. In each area, it explains several key results and methods, in an accessible and concrete manner. It also contains more advanced material in separate sections and thus it can serve as a collection of surveys in several narrower subfields. The main topics include: basics on convex sets, convex polytopes, and hyperplane arrangements; combinatorial complexity of geometric configurations; intersection patterns and transversals of convex sets; geometric Ramsey-type results; polyhedral combinatorics and high-dimensional convexity; and lastly, embeddings of finite metric spaces into normed spaces.

Jiri Matousek is Professor of Computer Science at Charles University in Prague. His research has contributed to several of the considered areas and to their algorithmic applications. This is his third book.