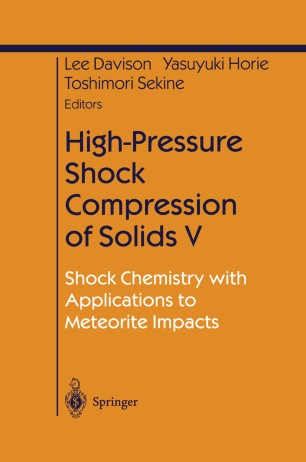 Shock waves produce a wide variety of physical, chemical, mineralogical, and other effects in materials through which they pass. Since the beginning of civili­ zation, shock phenomena have been subjects of continuing interest, speculation, and enquiry. The interdisciplinary aspects of investigations of shock phenomena are especially noteworthy, and these investigations have been pursued by scien­ tists and engineers from a broad range of disciplines. Among the more novel and interesting investigations are those motivated by problems that arise in the Earth and planetary sciences. Such events as meteorite impacts produce the obvious cratering effects seen on the planets and their sat­ ellites. More subtle effects become apparent upon chemical and petrographic examination of the shock-compressed solid material. Shock waves are also prevalent in the larger universe, and have played a prominent role in shaping the solar system as we know it. The material in interstellar gas and dust clouds, comets, etc. , is processed by shock waves, producing important chemical effects, including formation of complex organic molecules. The process of accretion of planets involves impacts of dust particles at relative velocities ranging from a fraction of a millimeter per second to impacts of larger bodies at velocities as great as several tens of kilometers per second. The resulting shock waves cause both chemical and physical changes that are manifest in the bodies involved.