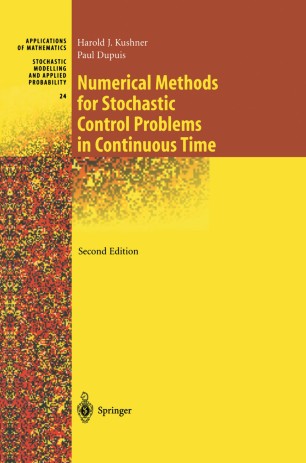 Changes in the second edition. The second edition differs from the first in that there is a full development of problems where the variance of the diffusion term and the jump distribution can be controlled. Also, a great deal of new material concerning deterministic problems has been added, including very efficient algorithms for a class of problems of wide current interest. This book is concerned with numerical methods for stochastic control and optimal stochastic control problems. The random process models of the controlled or uncontrolled stochastic systems are either diffusions or jump diffusions. Stochastic control is a very active area of research and new problem formulations and sometimes surprising applications appear regu­ larly. We have chosen forms of the models which cover the great bulk of the formulations of the continuous time stochastic control problems which have appeared to date. The standard formats are covered, but much emphasis is given to the newer and less well known formulations. The controlled process might be either stopped or absorbed on leaving a constraint set or upon first hitting a target set, or it might be reflected or "projected" from the boundary of a constraining set. In some of the more recent applications of the reflecting boundary problem, for example the so-called heavy traffic approximation problems, the directions of reflection are actually discontin­ uous. In general, the control might be representable as a bounded function or it might be of the so-called impulsive or singular control types.

"The second edition of this acclaimed book from Springer-Verlag has the latest theoretical and practical information on solving stochastic control problems. Including proofs and algorithms using diffusion, jump-diffusion, and other process models, the authors help make randomness a little less scary."
Amazon.com Delivers Mathematics and Statistics e-bulletin, July 2001
Buy options