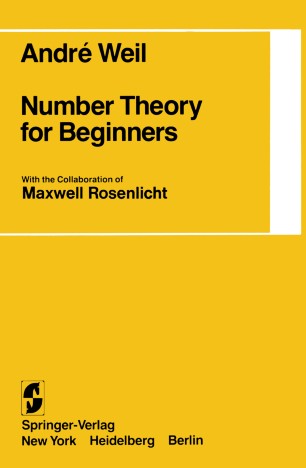 In the summer quarter of 1949, I taught a ten-weeks introductory course on number theory at the University of Chicago; it was announced in the catalogue as "Alge­ bra 251". What made it possible, in the form which I had planned for it, was the fact that Max Rosenlicht, now of the University of California at Berkeley, was then my assistant. According to his recollection, "this was the first and last time, in the his tory of the Chicago department of mathematics, that an assistant worked for his salary". The course consisted of two lectures a week, supplemented by a weekly "laboratory period" where students were given exercises which they were. asked to solve under Max's supervision and (when necessary) with his help. This idea was borrowed from the "Praktikum" of German universi­ ties. Being alien to the local tradition, it did not work out as well as I had hoped, and student attendance at the problem sessions so on became desultory. v vi Weekly notes were written up by Max Rosenlicht and issued week by week to the students. Rather than a literal reproduction of the course, they should be regarded as its skeleton; they were supplemented by references to stan­ dard text-books on algebra. Max also contributed by far the larger part of the exercises. None of ,this was meant for publication.