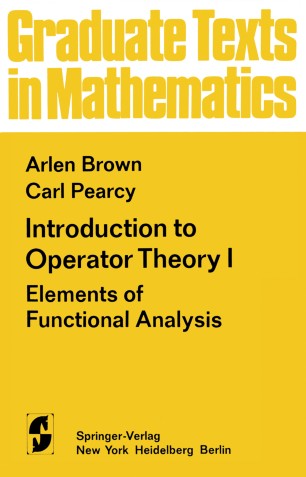 Introduction to Operator Theory I

This book was written expressly to serve as a textbook for a one- or two-semester introductory graduate course in functional analysis. Its (soon to be published) companion volume, Operators on Hilbert Space, is in­ tended to be used as a textbook for a subsequent course in operator theory. In writing these books we have naturally been concerned with the level of preparation of the potential reader, and, roughly speaking, we suppose him to be familiar with the approximate equivalent of a one-semester course in each of the following areas: linear algebra, general topology, complex analysis, and measure theory. Experience has taught us, however, that such a sequence of courses inevitably fails to treat certain topics that are important in the study of functional analysis and operator theory. For example, tensor products are frequently not discussed in a first course in linear algebra. Likewise for the topics of convergence of nets and the Baire category theorem in a course in topology, and the connections between measure and topology in a course in measure theory. For this reason we have chosen to devote the first ten chapters of this volume (entitled Part I) to topics of a preliminary nature. In other words, Part I summarizes in considerable detail what a student should (and eventually must) know in order to study functional analysis and operator theory successfully.