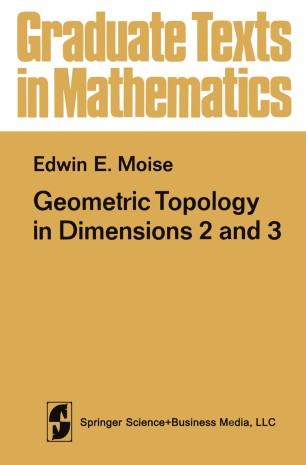 Geometric Topology in Dimensions 2 and 3

Geometric topology may roughly be described as the branch of the topology of manifolds which deals with questions of the existence of homeomorphisms. Only in fairly recent years has this sort of topology achieved a sufficiently high development to be given a name, but its beginnings are easy to identify. The first classic result was the SchOnflies theorem (1910), which asserts that every 1-sphere in the plane is the boundary of a 2-cell. In the next few decades, the most notable affirmative results were the "Schonflies theorem" for polyhedral 2-spheres in space, proved by J. W. Alexander [Ad, and the triangulation theorem for 2-manifolds, proved by T. Rad6 [Rd. But the most striking results of the 1920s were negative. In 1921 Louis Antoine [A ] published an extraordinary paper in which he 4 showed that a variety of plausible conjectures in the topology of 3-space were false. Thus, a (topological) Cantor set in 3-space need not have a simply connected complement; therefore a Cantor set can be imbedded in 3-space in at least two essentially different ways; a topological 2-sphere in 3-space need not be the boundary of a 3-cell; given two disjoint 2-spheres in 3-space, there is not necessarily any third 2-sphere which separates them from one another in 3-space; and so on and on. The well-known "horned sphere" of Alexander [A ] appeared soon thereafter.