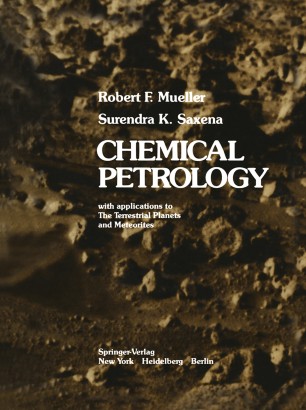 with applications to The Terrestrial Planets and Meteorites

Chemical petrology is essentially the physical chemistry of rocks and associated fluids, although it also borrows heavily from such other sciences as mineralogy. In terms of fundamentals it is firmly grounded in chemical thermodynamics and kinetics. In its treatment of terrestrial environments it grades imperceptably into sedimentology, geochemistry, and geophysics and in extraterrestrial environments into cosmochemistry. It is one of the most important branches of planetology and meteoritics. The unity of approach of thermodynamics and kinetics to processes in these diverse environments is stressed in this book by numerous examples which have been chosen to illuminate different aspects of the subject. Thus we have discussed in some depth such problems as the genesis of layered basic complexes, calc-alkaline batholiths, chondri tic meteorites, and the surface-atmosphere interaction of the planet Venus because these are important and because they are particularly good illustrations of the chemical petrology approach. Considerable attention also has been devoted to volcanic processes. In our treatment of metamor­ phism in particular, an attempt has been made to correlate and integrate the vast number of recent experimental, theoretical, and field studies. However, we have not attempted a comprehensive survey of all known rock types or occurrences, nor did we review all the diverse opinions and conclusions on the origins of controversial rocks. Instead we have chosen to stress interpretations we regard as following most directly from the evidence.