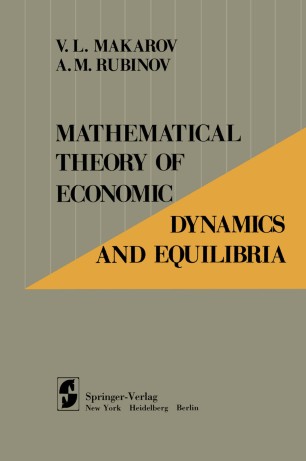 This book is devoted to the mathematical analysis of models of economic dynamics and equilibria. These models form an important part of mathemati­ cal economics. Models of economic dynamics describe the motion of an economy through time. The basic concept in the study of these models is that of a trajectory, i.e., a sequence of elements of the phase space that describe admissible (possible) development of the economy. From all trajectories, we select those that are" desirable," i.e., optimal in terms of a certain criterion. The apparatus of point-set maps is the appropriate tool for the analysis of these models. The topological aspects of these maps (particularly, the Kakutani fixed-point theorem) are used to study equilibrium models as well as n-person games. To study dynamic models we use a special class of maps which, in this book, are called superlinear maps. The theory of superlinear point-set maps is, obviously, of interest in its own right. This theory is described in the first chapter. Chapters 2-4 are devoted to models of economic dynamics and present a detailed study of the properties of optimal trajectories. These properties are described in terms of theorems on characteristics (on the existence of dual prices) and turnpike theorems (theorems on asymptotic trajectories). In Chapter 5, we state and study a model of economic equilibrium. The basic idea is to establish a theorem about the existence of an equilibrium state for the Arrow-Debreu model and a certain generalization of it.