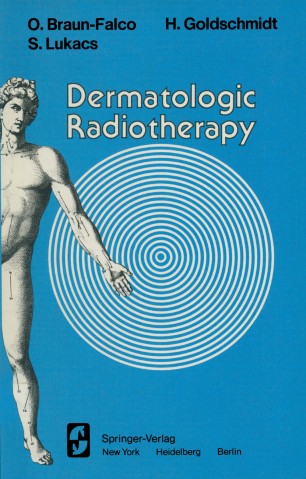 TO THE ENGLISH EDITION Ionizing radiation has played an important role in the treatment of skin diseases for many decades. With strict adherence to modern standards of radiation protection, radiotherapy is a safe and effective method that benefits many patients who cannot be treated adequately by other means. Although indications for dermatologic radiotherapy have decreased significantly due to advances in other therapeutic modalities, many dermatologists feel strongly that ionizing radiation is an integral part of dermatologic therapy that should not be relinquished to other specialties because of the highly specialized anatomic, pathologic, and technologic knowledge required. A recent survey of the National Program for Dermatology showed that 44% of 2,444 responding dermatologists use radiotherapy regularly for various skin conditions, particularly in the treatment of cutaneous carcinomas. Significantly, the American Board of Dermatology has decided to continue its requirement of special knowledge in dermatologic radiation therapy for board certification. Because I have taught this dermatologic subspecialty at various levels, both in Europe and in the United States, I readily agreed to accept Pro­ fessor Braun-Falco's invitation to cooperate with him and Dr. Lukacs in the preparation of the English edition of this new guide. The text deals mostly with modern concepts of dermatologic radiotherapy and empha­ sizes practical aspects of treatment. Although it is written as an introduc­ tion for young dermatologists, it may also be useful to experienced clinicians who want to keep up with recent developments in this field.