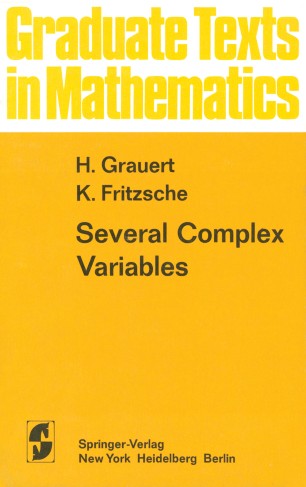 The present book grew out of introductory lectures on the theory offunctions of several variables. Its intent is to make the reader familiar, by the discussion of examples and special cases, with the most important branches and methods of this theory, among them, e.g., the problems of holomorphic continuation, the algebraic treatment of power series, sheaf and cohomology theory, and the real methods which stem from elliptic partial differential equations. In the first chapter we begin with the definition of holomorphic functions of several variables, their representation by the Cauchy integral, and their power series expansion on Reinhardt domains. It turns out that, in l:ontrast ~ 2 there exist domains G, G c en to the theory of a single variable, for n with G c G and G "# G such that each function holomorphic in G has a continuation on G. Domains G for which such a G does not exist are called domains of holomorphy. In Chapter 2 we give several characterizations of these domains of holomorphy (theorem of Cartan-Thullen, Levi's problem). We finally construct the holomorphic hull H(G} for each domain G, that is the largest (not necessarily schlicht) domain over en into which each function holomorphic on G can be continued.