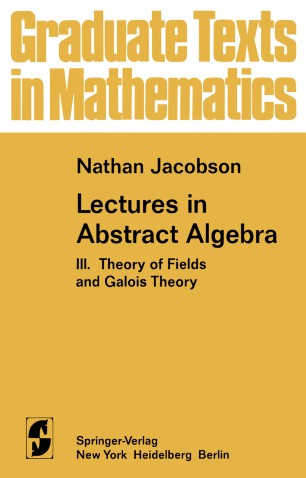 The present volume completes the series of texts on algebra which the author began more than ten years ago. The account of field theory and Galois theory which we give here is based on the notions and results of general algebra which appear in our first volume and on the more elementary parts of the second volume, dealing with linear algebra. The level of the present work is roughly the same as that of Volume II. In preparing this book we have had a number of objectives in mind. First and foremost has been that of presenting the basic field theory which is essential for an understanding of modern algebraic number theory, ring theory, and algebraic geometry. The parts of the book concerned with this aspect of the subject are Chapters I, IV, and V dealing respectively with finite dimen­ sional field extensions and Galois theory, general structure theory of fields, and valuation theory. Also the results of Chapter IlIon abelian extensions, although of a somewhat specialized nature, are of interest in number theory. A second objective of our ac­ count has been to indicate the links between the present theory of fields and the classical problems which led to its development.